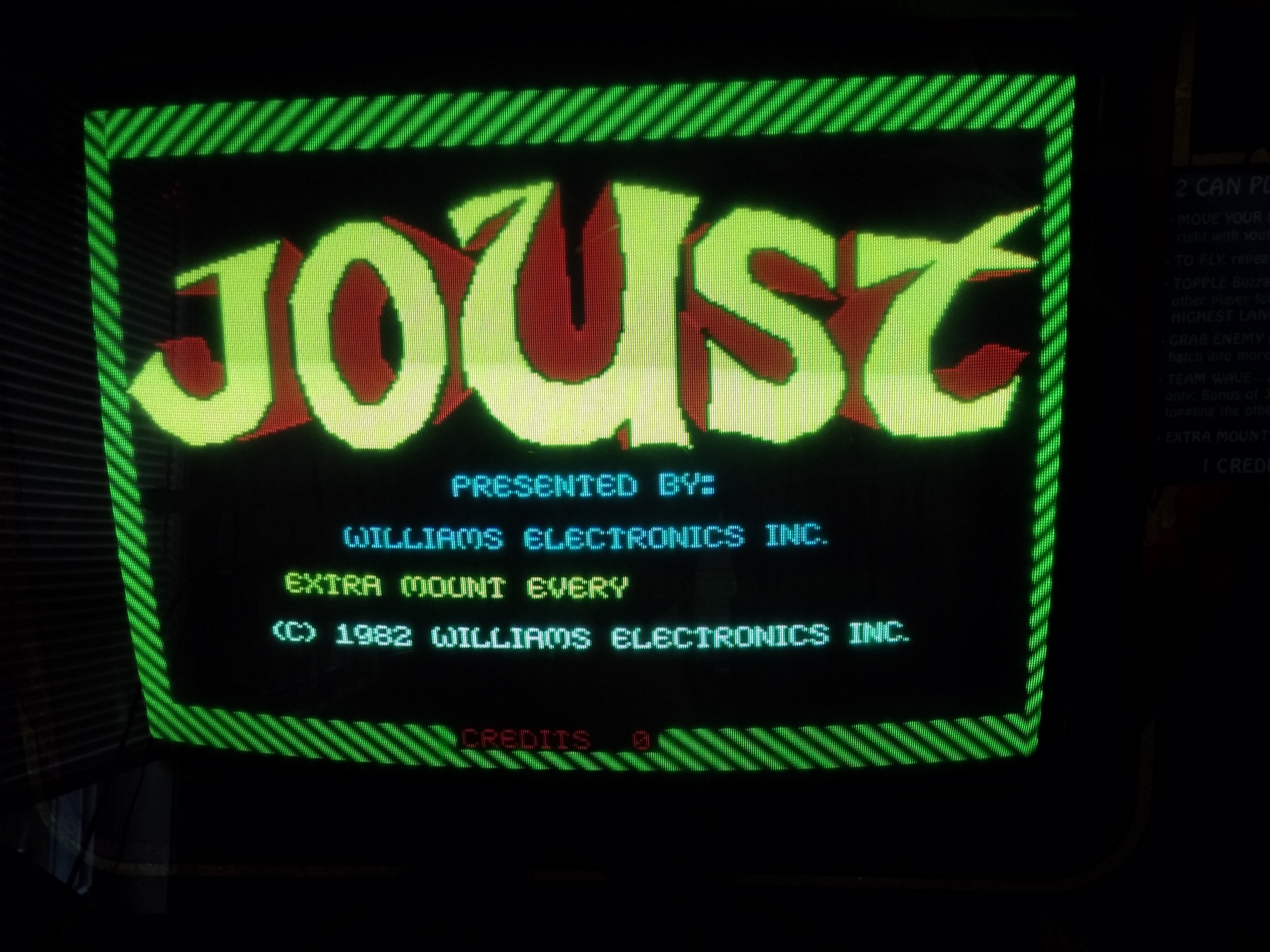 So it came to pass that I ended up with three cabinets for $100 each.  A Great Golf in a Midway cabaret, some Toaplan run-n-gun in a Taito Qix cabinet, and… A Joust(!) in its original cabinet.

I agreed to purchase all three sight-unseen.  When I get them all home, the golf game worked except for a rolling screen, the run-n-gun has an board issue where some sprites are being displayed at the wrong horizontal locations, and the Joust?

Well, the Joust was dead.  Simple static video (monitor needs a cap kit, too), watchdog barking, no response to  inputs, nothing on the LED on the ROM board.

Power voltages were where there should be but ripple was high.  Recapped power board.  Both voltages and ripple are good now, but board still dead, same screen as above.

Replaced CPU – nothing.  CPU’s address and data lines look like they are trying to do something, so I go through the SOP of reseating everything.  Noticed some RAMs were getting hotter than others (some were really fricken hot) and some had floating pins that sometimes saw activity when pressed on.  Pulled a few RAMs and noticed some nasty stuff on some pins and on sockets.  Decide to replace all 27(!) sockets on the CPU board which turned out to be a major PITFA!

The PITFA part was not the clipping and desoldering of each individual pin(!), it was that it appears that Williams boards are allergic to me!  I must have pulled more traces and pads on this board than all other boards I have touched in my life! All in all, I had to repair no fewer than 6 pads and 4 traces on this one board alone.  While I was there, I also did the lithium battery mod for the CMOS memory.

(After removing all sockets I took the time to wash the board with a little soap and a nylon brush, followed by a distilled water rinse and a little time in a warm oven, because of this brownish crud that was on it and under some sockets.)

Anyway, after that 3+ evenings of work I still had a dead board, but this time I has a little more activity on the screen:

Not sure if you could call that a real improvement, but better than nothing!  So I started looking at other things.  I replaced all of the caps on the CPU and ROM boards and decide on doing the RAM mod to change to 4164 chips and eliminate the 3-voltage 4116 chips.  (I traded another collector the Midway cabaret cabinet for a tube of 4164 RAM chips, a few 6821 PIAs and a 2-slot Neo Geo cab that is partially stripped.)

After those changes are done, I get some different behavior from the game:

I get different colors, and sometimes flashes onscreen as well as random sounds on occasion.  LED indicator sometimes flashes “things,” like what appear to be incomplete parts of numbers – things that looks like upside-down “F“s, lowercase “O“s or “U“s, or what look like missing segment thingys (video was recorded dark cause the LED segments were causing too much flare):

Pressing on the ribbon connector between the CPU and ROM boards caused sight changes in behavior so I replaced it using an older IDE cable that I cut one end off of.  In the end, this did not improve things much, so I resigned myself to doing the sockets on the ROM board too. That was another PITFA.  I even had solder flow through a hole and pool on the other side of the board, so I had to clip and unsolder a newly replaced socket or two as well.  I quickly figured out that a strand or two of stranded wire wrapped into a tight loop and placed into a damaged hole will give the solder something to “hold on to,” and seemed to prevent flow-through.  After all that, I get a screen similar to above, but now I have things flickering and moving up the screen, similar to the previous video.

After taking a step back for a couple weeks (lumbar disc issues), I decide to start over at the CPU and verify each line.  I discover that A7 is going into the first buffer OK, but is always low on the output side of the buffer – something is pulling A7 low.  I start clipping and pushing back together pins on everything connected to A7, and find a 74LS133 (13 input NAND gate) at 5G whose pin 7 is connected to A7.  If I put my probe on this pin, I can see it is low.  However, if I keep the logic probe on it for a couple of seconds, it starts toggling and working correctly(!) and the game starts to rug with a corrupted screen and shows me 1 3 5 on the LED.

So I have successfully breathed life into this game.  See?  I am starting to get better at this stuff.  I am no Mark Spaeth, but I am getting better!  🙂

(The remainder of the troubleshooting/repair has been moved to separate posts.  The next post is here.)